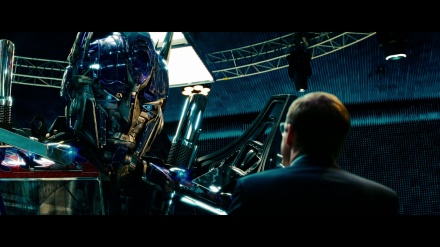 So you’re thinking of going to see “Transformers: Revenge of the Fallen” are you? Well alright, that’s fine. Really it is, I’m not going to stop you. It’s not against the law to be a masochist after all is it? You aren’t really doing anything wrong hurting yourself by watching this trash, but I think that if you have any faint glimmer of the natural instinct of self preservation, then you will stop yourself right now. Don’t make the same mistake as I did and watch “Transformers: Revenge of the Fallen” in the vicinity of sharp objects.

Now that I’m done exaggerating, I’m very angry to tell you exactly why this movie stinks. This is usually my plot summary paragraph, but I am finding it hard to tell you what happened while my eyes gazed in despair. Colonel Kurtz put it best, “The horror, the horror!” he let out meekly with his dying breath. He had just watched “Revenge of the Fallen”. When Alex was forced to witness those horrifying images in “A Clockwork Orange” this is also what he saw. When Tyler Durden laced images into family screenings during “Fight Club” do you think that was a phallus you saw? No, that was also a scene from “Revenge of the Fallen” and no, I’m not still exaggerating. My career as a conspiracy theorist isn’t blooming but the evidence is there. You want a plot summary paragraph? How about a sentence of what I was able to make out in 2 and a half hours of torturous drek.

An ancient Transformer called the Fallen has returned to destroy all human life because he hates them and needs energon!

Perhaps by Transformers six I’ll be able to summarise the plot with the word “Bang!”. You’d have thought that a film like this would be high octane and fast paced. A trend I’ve noticed is that Directors seem to think that you can’t have a blockbuster without having a film that’s over 2 hours long. This film has the plot of a short film and it drags it out so much I can’t tell you just how bored I was. In a film with huge explosions and morphing robots, I was begging for the end. The length is an abomination and it serves to make all of the other problems a hundred times worse.

Sam Witwicky (Shia LaBouef) is still here and he is even more annoying in this one. He goes to college and we get to witness the plot fall into a stand still for what felt like 3 hours, but I’ll assume was only about 45 minutes in reality. Megan Fox is back as Mikaela and we get to see her bend and undress just for the sake of it. How wonderful, character development has well and truly been confused with breast development. The college part of the movie serves to detract from the other scenes which actually advance the story, so whenever things look like they might get going, we get treated to Shia LaBouef doing the usual “This is going to be so embarrassing in front of new people” routine. The college scenes interject like an army of red socks in a whites wash, it’s just a real mess.

When the film does ramp up into action what we find is that this is also just dreadful. Fights take place for no discernible reason other than a fight should take place. Even the action taken without context is awful because half the time you can’t even make out what’s going on. The Autobots and Decepticons (I think) roll around with each other and it’s sometimes impossible to know what’s happening. Action isn’t fun if you can’t see it, that’s what “Pacific Rim” did so well. That film let action take place and just allowed you to see every little detail of these huge creatures and robots battling it out, have you ever looked into a washing machine and tried to look at the clothes? You know how you can’t distinguish the clothes from one another? You know how that got boring really quick? I apologise for the second washing machine metaphor but it was just right for the moment.

In the end, after the film has dragged on and you’ve endured what feels like a long bout with a brain tumour that you narrowly managed to beat. You’ll go to sleep, and after your nightmares you’ll wake up and realise that the “Transformers” franchise isn’t dead, and that it can’t be killed. It will chase you for the rest of your waking life and you will find it hard not to blame everyone else for throwing money at these robots and allowing this to happen. In some ways it’s worse than world hunger, because at least with that we turn a blind eye. With “Transformers” we actively seek it out and waste a few hours every couple of years subjecting ourselves to it. It will take more than a trip through the rinse cycle to bring this series out of the dirt.