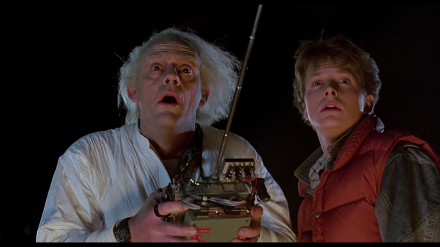 I don’t really know if there will be any benefit to me telling you just how good “Back to the Future” is. You’ve probably seen it and almost certainly loved it. If you haven’t seen it, you’ve almost certainly been told at some point that you are missing something pretty special. Perhaps I can help those who have heard it’s good but don’t quite believe it, your friends are right. It’s one of the greatest family movies to have ever been released. Sometimes you might not feel like watching a “heavy” classic, sometimes an action movie just wont suit you and neither will a horror. “Back to the Future”? Everyday of the week.

The movie opens with a pan over a cluttered room filled with clocks and a box of illegally acquired plutonium. It’s the standard cluttered headquarters of a mad scientist, but Marty McFly (Michael J. Fox) lets himself in and we are gradually introduced to one of the most likeable and most relateable characters in movie history. Michael J. Fox achieves the same sort of effect that Emma Stone did when she played the only good thing about the recently released “The Amazing Spider-Man 2”, though he does a far better job. Doc Emmett Brown (Christopher Lloyd) has had the plutonium “provided” to him by Libyan’s that don’t act simply out of good will, to say the least. As Doc Brown displays the prowess of his new time machine to McFly, he finds himself at the wrong end of an AK-47, which causes Marty to be flung 30 years into the past to 1955 in an effort to escape.

Marty’s family in 1985 isn’t quite what he’d like. His father, George McFly (Crispin Glover) has been bullied by Biff Tannen (Thomas F. Wilson) since high school. His Mother Lorraine (Lea Thompson) is very reserved and doesn’t believe boys should be seeing girls at his age, “Look, I think the woman was born a nun” exclaims Marty. His mother tells of when she and George first met, but when Marty manages to disrupt this meeting in 1955 he finds that his mom’s actually got the “hots” for him. It’s weird and in a way sort of disturbing, but it is always hilarious and suitably tense watching Marty juggle getting back to the future and also trying to get his parents back together to ensure his eventual existence. Oh, and George McFly has more trouble talking to girls than Adam Sandler has making quality entertainment.

Like I said, the film is just perfect to dig up every now and then and to just watch and enjoy yourself for an hour. It isn’t particularly deep but it doesn’t need to be, it makes up for it in sheer charisma and a just flat out enjoyable narrative. The screenplay is wonderful, Bob Gale and Robert Zemeckis did a spectacular job of making every scene funny without turning the film into an all out comedy and while never making any of the comedy feel forced. “Back to the Future” makes jokes in nearly every scene, many of them are amusing because of the scenes that have taken place in 1985 that we can easily place in our minds and make sense of. Before Marty gets sent back in time, the film places images and sets in our head that we see reflected in the scenes set in 1955. much of the films first half hour are setting up segments of humour for later on. This might sound contrived and negative, but it never feels as though the film is doing this. It is all woven around a story and characters that is just too damn fun to not love.

Doc Brown works with McFly in 1955 to try and send him back to the future, the “flux capacitor” of his time machine requires 1.21 gigawatts (pronounced jigawatts, good to know) and a speed of 88 miles per hour. Marty tells the Doc that lightning will strike the Hill Valley clock tower at precisely 1:04 AM and this can be used to power the machine. The eventual rush and ridiculous delays that ensue are endlessly entertaining. The climax of George and Lorraine’s story at the school dance is one of the most memorable scenes in movie history. As Marty McFly strums away at “Johnny B. Goode” and disconcerts the 50s crowd with his enthusiasm you can’t help yourself from wanting to jam along. The film just makes you happy and is filled with moments that are intensely quotable. Marty’s so called “life preserver”, Lorraine mistaking Marty for Calvin Klein because of his underwear and of course the final line: “Roads? Where we’re going we don’t need roads”.

“Back to the Future” is a time capsule. Those that didn’t live in the 80s may find themselves wishing they could have experienced it, or more accurately the 50s. I feel I missed out, being able to see “Back to the Future” in the cinema and then coming into school the next day to talk about it would have been amazing.

“You know that part where the DeLorean drives through Marty and Doc Brown and leaves the flaming tire tracks!”

That would have been something.