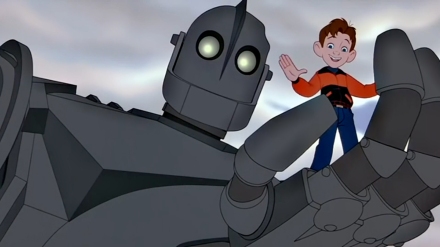 Its been said time and time again with regards to what a “good” animated film is, the idea that a truly good animation should not only keep the kids quite for an hour and half but also keep the adults engaged as well. I don’t think every movie necessarily needs to cater to everybody, movies for children alone are totally fine. Movies like “The Iron Giant” however are special because they involve older and younger audiences perhaps equally. How can kids not appreciate a story where a normal kid befriends a friendly alien robot? How can adults not appreciate a great story with stellar visuals laden with relevant historical context? “The Iron Giant” is engaging and utterly rewarding.

the story centers around Hogarth Hughes (Eli Marianthal) who is struggling to convince his mother (Jennifer Anniston) to get a small pet squirrel. So when he meets the Iron Giant (Vin Diesel) it makes sense that he would have to hide the stories tall machine from prying eyes. quickly the Giant and the young boy become inseparable, which is in itself a problem as Hogarth has to literally force the Giant from not following him home. The presence of the Giant hasn’t gone completely unnoticed and the government has sent Kent Mansely (Christopher McDonald) to check out the situation in Rockwell. He soon becomes fixated on Hogarth which makes things very difficult for the unlikely duo.

Brad Bird — who directed “The Incredibles” — has portrayed the Giant perfectly. The camera looks up at the giant from the ground and he looms over the field of view. The unforgettable sound of his thundering footsteps are another part of what gives the Giant his presence, who is represented using CGI that quite frankly looks stunning. A scene early in the film that playfully shows Hogarth trying to hide the Giant’s moving severed hand from his mother at the dinner table. Scenes like this create welcome humour out of a film that otherwise plays it straight.

Yes, unlike most products of Western animation “The Iron Giant” isn’t about singing caterpillars and princesses. The only thing that sets it apart from live action films is the fact that it uses animation. I personally don’t have a problem with singing animals if it is done right, but I feel the departure from this is one of “The Iron Giant”‘s strongest assets.

The cold war paranoia tied into the Giant gives the film more relevance. Discussions are underway about whether the falling ball of flame was perhaps Sputnik? The theme in the film is always present but it stays in the background for the most  part. The camera only lingers for a second on Hogarth’s comic book “The Red Menace” as he rushes out the door with his gun to investigate the crash. Extra depth in my films is always welcome of course.

The tale between Hogarth and the Giant is the most endearing part of all. The friendship between man and machine is always believable. Even when things start to go haywire with the Giant discovering what he may have been made for, we can see that he doesn’t ever want to hurt Hogarth or anything for that matter.

“You are what you choose to be” is the motif and central theme of “The Iron Giant”. By the time we reach the films spectacular and heartbreaking ending, we realise that the Giant is not governed by his programming. He chooses to be good when he was clearly designed otherwise, though this is no surprise — it is no less poignant.