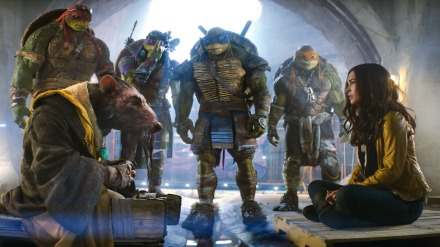 I have next to no previous affiliation with the “Teenage Mutant Ninja Turtles”. Until I watched this movie, my first “Turtles” experience, I didn’t even know all four of their names. Nevermind which was which. So my prejudices don’t have to be left at the door, I don’t really have any. That is a lie, Michael Bay has his name slapped all over this one and my recent forays into his way of doing things have been unanimously upsetting (Transformers: Revenge of the Fallen) but he didn’t direct in fairness. Jonathan Liebesman directed “Wrath of the Titans” which I had the misfortune of seeing twice in the cinema and fell asleep the latter occasion; and “Battle: Los Angeles”. I haven’t actually seen that last one and that is because the general consensus is that I should avoid it like the plague. Clearly “Teenage Mutant Ninja Turtles” has everything going for it… so how is it? Make no mistake, he may not have directed but this is a Michael Bay movie, and all that implies.

For 20 minutes or so we are stuck watching April O’Neil (Megan Fox) trying to find a big story that will bring her some success in her reporting career. She inevitably finds herself on the trail of the Foot Clan led by the evil sensei Shredder (Tohoru Masamune) who is also being pursued by strange vigilantes that she can’t seem to get a glimpse of. Eventually she manages to take a snap of the four turtles together, and she quickly seems at ease with the idea of mutated turtles that happen to be teenagers (as if that matters) wandering the streets of New York.

Michaelangelo (Noel Fisher), Leonardo (Johnny Knoxville), Donatello (Jeremy Howard) and Raphael (Alan Ritchson) make up the Teenage Mutant Ninja Turtles. They have been spotted on the surface which their master Splinter (Tony Shalhoub), who is also their “father”, has forbidden. April O’Neil finds herself in danger from the Foot Clan which Splinter realises he and his turtles must prevent and this leads the ninjitsu proficient reptiles to discover a plan to wipe out most of New York (of course) which culminates in a finale annoyingly reminiscent of “The Amazing Spider-Man”.

I don’t expect this to be a serious story, and I can appreciate a ridiculous movie every once in a while. Jonathan Liebesman has made the mistake of creating a really ridiculous movie that tries so hard to be meaningfully action packed and even sometimes emotional, there is just too much going on. April O’Neil finds herself being romantically pursued by Vernon Fenwick (Will Arnett) which is quite frankly annoying as hell to watch. In fact, any scene involving Megan Fox is just painful to watch because she is so incredibly stale as April who just has to be one of the weakest main characters ever put to film. Yes, she is the main character and not the Turtles themselves but perhaps this is to be expected of a Michael Bay movie.

There is still that incessant humour that is anything but funny again. Of course the point of the Turtles isn’t to be hardcore and deeply troubled heroes that are the Testudines their city deserves but doesn’t need right now. Therefore there is perhaps even more supposedly “witty” dialogue that fell flat every time. Michaelangelo (the orange one) is the turtle with the least restraints in this regard, I adamantly dreaded hearing anything come out of his scaly mouth again.

Something can be said for the fact that at least the Turtles can be distinguished from one another, I can at least name all four now. I still mainly know them by colours but their personalities are distinct enough in the film — besides maybe Raphael (the red one) and Leonardo (the blue one) — that I can give credit where a modicum of credit is due.

Some people do appreciate the Michael Bay way of doing things so for them I say this: There is basically no reason why you should hate this movie if you enjoyed all but the first “Transformers” movies — I say that because I can understand why people like the first one. It has enough dumb action that is filmed much better than it was in “Revenge of the Fallen” and it happens relatively frequently. It is still filmed pretty poorly however, a lot of the time Jonathan Liebesman zooms in way too far and because of this much of the action that takes place occurs off frame. It’s confusing and not fun to watch, only an action scene later involving the Turtles being pursued down a mountain as they slide on their shells is relatively interesting. Even though at one point Raphael slams into a vehicle and after a quick cut seems to disappear from existence…

I don’t like the aesthetic at all. The Turtles are great technically, but a lot of the time they look sort of creepy. I heard complaints about this from turtle fans and I have to agree, they look too human and not human enough at the same time. The J.J. Abrams lens flare is here but it has never bugged me as it managed to in this film. Finally why does so much have to be so damn hazy and steamy? It’s entirely subjective whether or not you like the look of the film because technically it is very impressive but damn I hated it. I stared into space at my wall after it was done and my wall never looked so good.

Shredder’s mech costume looks great but that is it. Think the mechanical samurai fight in “The Wolverine” and you get the idea, Shredder has a cool voice that is cool on the surface but he has no personality. The mech suit doesn’t feel like a suit because Shredder has the personality and the presence of a robot. Thinking back over this movie is really hard because it is so silly and disjointed that I keep remembering new things that annoy me, and that is because nearly everything is just awful.

What can I say, I expected this anyway but I’m not the only one by a longshot. A lot of what makes the film even remotely bearable is that it is only and hour and a half long. Another hour of this and my review would have been made up off a sequence of “$%^&” and “^%&$” repeated an inhumane number of times.

It still would have been more coherent than the “Teenage Mutant Alien Ninja Hero Karate TMNT Turtles” are, incredibly.