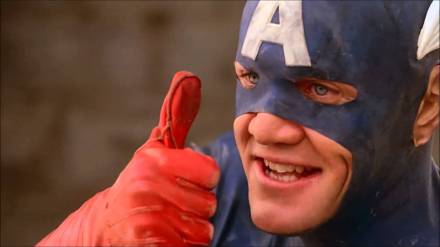 There do exist those special movies that alert you to their awfulness minutes into the film. In “Captain America” we are instantly treated to a scene that should be poignant, but instead the foreign language scene leaves us confused due to the scene being half subtitled. Half subtitled shouldn’t be a thing, it’s all or nothing unless you have a damn good reason for it. This movie had a $10,000,000 budget, “Reservoir Dogs” — A film I didn’t enjoy but can still appreciate — was made for $1,200,000. Take this opportunity to really let that sink in. This movie wasn’t theatrically released in America until 2011, and that was to promote the vastly superior “Captain America: The first Avenger“. If I had watched this prior to seeing that then I can tell you I wouldn’t have bothered watching the new one, end of story.

The super soldier project that was used on Captain America was also used prior to him experimentally on a young Italian boy, it succeeded apart from his disconfigured face which resulted in him being known as the “Red Skull” (Scott Paulin). After a battle in World War II with the Skull, Steve Rogers (Matt Salinger) is defeated and frozen until the 1990s. After he re-awakens, he finds the Skull still alive under a new identity, and that the President has been kidnapped. It’s one of the most generic superhero plots out there.

Production value, let’s talk about that. I’ve already mentioned that this film was working with a budget almost 10 times that of “Reservoir Dogs”. There is no excuse therefore, that this film should just play so shoddily. The editing is awful, there was a notable time where a scene cut and the music jolted because the sound clearly wasn’t synced up right. Other times you can just clearly see that peoples mouths aren’t moving when they are supposed to be speaking This happens most often with the Red Skull, who I actually assumed at first couldn’t move his mouth because someone had poured red candle wax over his face, that’s what he looks like anyway.

There isn’t actually a good thing about this movie. The only way you could like it is if you enjoy dreadful films, and I can certainly see why someone would. It could certainly be an entertaining movie to show with a group of people just for the sheer enjoyment of bashing the hell out of it with a bunch of people. On your own though, it’s actually just flat out dull. The times I chuckled in this movie were akin to the times I chuckle when I receive a dreadful test result. Don’t flatter yourself Captain, It’s a chuckle of resignation.

I could sit here and write a thesis on why this movie is bad. I won’t bother you though because the movie doesn’t deserve that kind of attention. It’s a shallow movie that features a big guy in a suit that looks like a swimming cap that has been covered in talcum powder stretched over his body. The acting is awful, the writing is awful… You know on TV when they try to represent bad action movies and exaggerate it extensively? I always thought “Oh c’mon they aren’t ever actually like that”.

Not the first time I’ve been wrong.